How to Master Public Speaking

How to Master Public Speaking

For some people, public speaking seems a fate worse than death. But what is it about the theoretically benign yet terrifying act of delivering a speech that scares some of us so? And how can you get over your public speaking anxiety? We explore it all below.

Percentage of Americans who fear:

Why is the Fear of Public Speaking So Common?

The Evolutionary Theory: Humans fear public speaking because an unsatisfactory performance could lead to ostracization from the group, which would have historically meant death, as early humans had to collaborate to survive. (2)

Individuals who are socially isolated were found to be 26% more likely to die sooner than their socially connected peers. (3)

The Traumatic Theory: People who fear public speaking have had traumatic experiences with it in the past, such as being laughed at by a classmate during childhood. (2)

More than 1 in 5 children report being bullied, a common form of childhood social trauma. (4)

The Neurological Theory: Extreme cases of glossophobia may actually be selective mutism, which prevents the sufferer from speaking in particular situations, and may be caused by an overactive amygdala, the part of the brain responsible for decision-making and emotional reactions. (5)

Selective mutism may also be caused by social anxiety disorder, which is estimated to affect 1 in 8 children. (6)

Problem: Thinking that if everything doesn’t go perfectly, you’ll fail.

Solution: Accepting that perfection is impossible; appreciating the elements that work.

Problem: Assuming your next public speaking event will go badly because a previous one did.

Solution: Understanding that a single misfire does not dictate everything to come.

Problem: Believing your public speaking event was a disaster while it was actually fine.

Solution: Waiting to learn your audience’s reaction before judging yourself too harshly.

Problem: Anticipating that you will perform poorly despite extensive preparation.

Solution: Appreciating the effectiveness of daily rehearsal and practice.

Beyond preparation and positive thinking, there are a few more “hacks” to public speaking: (8)

Exercising: Exercise primes your brain to better deal with stress, so work out the morning of your speaking engagement.

Memorizing: Starting is often the hardest part, so memorize the first three lines of your speech.

Discussing: Instead of planning a monologue, create a dialogue by asking questions, taking polls or playing media.

Selective mutism can also be treated through a combination of speech/socialization therapy and low doses of anti-anxiety medication, although this obviously is recommended only for extreme, diagnosed cases only. (9) 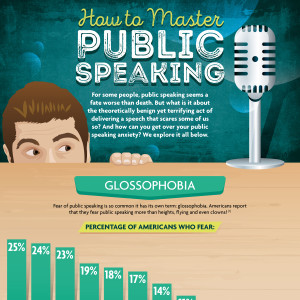